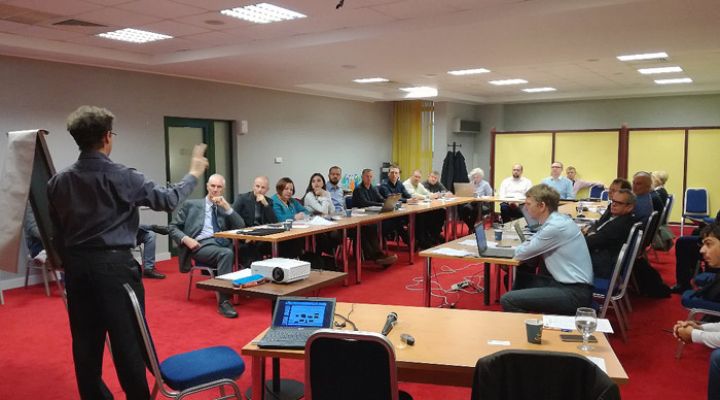 The sixth technical workshop of CROCODILE 2 took place in Timisoara, Romania. The main focus this time was on static data, including the following questions: What data are available on the side of the motorway operators, how can they be exchanged and what standards should be used for a common approach? All CROCODILE activities are aligned to requirements of the ITS Directive and its supplementing delegated regulations. Much has already been achieved in terms of dynamic data also, however static data was not so much in the focus since November 2016. So the purpose of this workshop was to depict the status quo as well as giving a perspective, a strategy or an explanation of willingness from the participating Member States to start with exchanging static road data.

The participants were invited to give a short elevator pitch on the availability and processing of static data in Member States. The discussions revealed that many categories of static data can already be covered with currently available data. However there is no point in just pushing out all available static data, since not all of them are relevant to neighbouring motorway operators. The purpose of data exchange lies within the enhancement of end-user services, thereby improving the continuity of such services, which again contributes to realising the provisions coming from the ITS Directive. Data can be exchanged via NAP but in a first step this can also be handled bilaterally. It was also pointed out that NAPs are sometimes differently set up (actual data vs. meta data), adding to the complexity of the situation. Participants emphasised that data exchange requires purpose, otherwise there is no use in it. One purpose is to add to the continuity of services (ITS Directive), as done with their neighbouring countries. Operators cannot be aware of all data consumers yet so there a certain variable component to it where they have to make assumptions. Five neighbouring Member States gave their commitment to set up a pilot on static data exchange across their national borders. The next steps will include more specific discussions about the relevance of the data categories, what standards can be used and also the role of the National Access Points. The responsible road operators should meet again in March 2019 to coordinate their efforts.