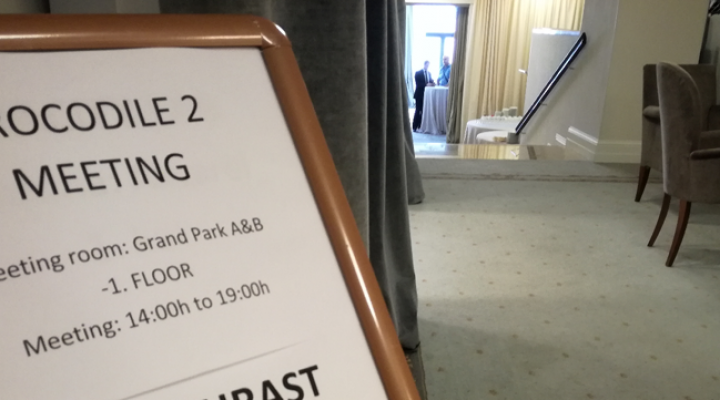 The first two half-days of the workshop were dedicated to specific training and learning workshops in cooperation with the CAPITAL project. Next to the CROCODILE 2 partners numerous public administrations and road authorities from the neighbouring countries Serbia and Bosnia and Herzegovina, as well as from Montenegro were invited to join the workshop. Participants were mainly quite new to the topic of ITS or had some experience.

CAPITAL organised together with CROCODILE 2 a two-part training focusing on the legal and policy framework for the deployment of ITS and C-ITS. The first day was especially dedicated to the legal framework for ITS. It started off with a short and very focused introduction on the legal framework for ITS, especially focusing on the ITS Directive and the Delegated Regulations as basic guidance for ITS deployment. Following this introduction speech best practice examples and learnings from previous or current ITS implementations from Hungary, Croatia and Austria were presented. This input session was followed by an interactive session. Split up in small groups the participants were taking part in the ITS Quiz, the Delegated Regulations Challenge and discussed their major learnings as well as future training needs.

Day 2 of the common workshop was focused on the guidance for the implementation for Cooperative ITS (C-ITS). AustriaTech gave an overview of the European policy framework for C-ITS and introduced the C-ITS Strategy Austria giving an example of the national implementation of the C-ITS Strategy. This was followed by an overview of the C-Roads platform as lever for harmonized C-ITS implementation in Europe. The second part of the input session was dedicated to current implementation examples for C-ITS in the Czech Republic, Hungary, Italy and Slovenia. After all these input presentations the participants were invited to join the “Market Place Session”. Next to the opportunity to experience C-ITS Day 1 in Virtual Reality within the C-Roads Virtual Reality Demonstration, participants could stroll around different information- and discussion-stations, informing on the upcoming CEF Call, assessing the C-ITS status in their own country, providing feedback to CAPITAL regarding the training or exchange on their implementation experience within a space dedicated to bilateral discussions.

On the second day afternoon, several contributions were made on the topic of DATEX II, starting off with international exchange and experience from DATEX User Forum presented by Jan Vlcinsky. He gave an overview on the DATEX II Light mobile App for SRTI and introduced DATEX II v3.0 which uses the latest UML version and is therefore easier to use than DATEX II 2.3. The use of URIs (Uniform Resource Identifier) shall enable unambiguous identification of resources in DATEX II and thus a more efficient access to available profiles. Regarding Location Referencing he recommended to use OpenLR and accompanying provision of guidelines to be able to fill out DATEX II profiles.